Here’s another important contribution from our friend and colleague Marcelle Good — a 6th grade teacher at School of the Future (Brooklyn) and a Math for America Master Teacher.

In this post she illustrates the role of number strings in helping students to reason quantitatively. This idea  — codified as one of eight Standards for Mathematical Practice — means that students of all ages can “make sense of quantities and their relationships
in problem situations…the ability to contextualize.”

It also suggests that students have developed the “habit of creating a coherent representation of the problem at hand….considering the units involved, attending to the meaning of quantities, not just how to compute them.” In other words, giving students the chance to situate numbers and other values in a story and using those stories to make sense of the mathematics.

To be honest, I was slow to come to the idea of loving context in number strings — the numbers were so beautiful on their own!  An even bigger issue was that the context never seemed to be taken up by students during independent work or when the problems got more complex.

Recently with my students, though, I came to really appreciate the power of story as a referent for kids. When my entire class tried to convince me that since 100 cars would have 400 tires, 99 cars would have 399, I knew I had a problem.

With just a bare number ratio table, my kids would not have found their way out of this misconception. But, with the context in mind, one of my 7th graders explained to the class, “This is how you think about it: You have 100 cars for some reason. Some jerk comes and steals one of your cars. He doesn’t drive off with one tire — he drives away with four tires, so you have 396 left.”

Before another example, some background about me and my students. At my school, School of the Future (located in East New York) I am really struggling to help students access grade-level content. When they enter my school in 6th grade, most of my students are 3 to 4 years below grade level. To address the challenge, our approach has been to take the long view: we are not too concerned with getting them to do 6th grade math in 6th grade. Instead, our goal is to get them to do 8th grade math by 8th grade.

That wasn’t our initial approach. Originally, we tried to teach them grade level content, and scaffold the work by re-teaching or reviewing topics like double-digit multiplication or generating equivalent fractions. What we found, as a school community,  was that this approach was not working, and just not enough. Students were entering 7th grade with a partial understanding of 6th grade, and still lacking a weak foundation.

As a result, I spend a lot of time figuring out exactly what my students know.

Do they have a concept of how the number ten works in addition and why it’s so powerful?

What ideas so they have about multiplication?

Do they have a concept of area?

Do they count only by ones, or do they have some strategies?

Once I know where they are, I work to address their needs in class by meeting them where they’re at. My students who are the least ready for 6th grade material are also assigned to a numeracy class, in addition to their regular 6th grade math class. And in this class, I give myself permission to teach what would be considered K-5 mathematics.

Now, as I prepare to lead number strings where I know the math is more challenging for students, my first question is always, “What story can you tell about what happened?”

Today, the story was that I had to buy coffee for a meeting (this part was true), and that I had bought 4 cups of fancy coffee for $7. The next part of the string was: Then, something happened and I had bought 8 cups. Turn and talk to your partner to tell them a story about what might have happened.

Students said things like, “Then you got back to school and 4 new teachers showed up to the meeting so you had to go back.” We are on the 5th floor of my building, so the students were feeling pretty bad for me.

They groaned when I put a 10 on the chart under the cups of coffee, possibly a sign that they were invested in the context with me. “What story can you tell now?” I asked them. KellyAnn said, “The principal called you and said we had visitors and that we needed two more cups.” Andrew said, “Now we have to figure out what two cups cost, I’m not sure about that.” 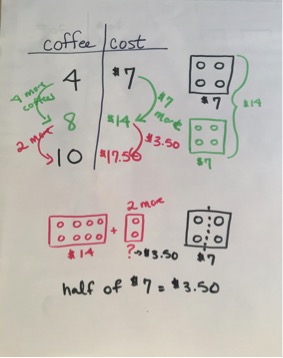 A few takeaways from this lesson:

One student’s notebook who struggled a lot with proportional reasoning, but then was able to draw pictures to work through the story.

When we think about context in number strings, this question, “What happened next?” gives students an entry point to get started, and often, this translates so quickly to a picture. My students now know they have been invited into a world where maybe we can have a garage with 100 cars, or I can spend an entire day just on coffee runs, and we can wonder about how many stairs we have climbed. After many such invitations, they’re willing to go there with me to think about the math. The numbers are beautiful on their own, but that’s because they tell us a story.