When designing strings, there are typically one or more helper problems before a challenge problem.  For example, you might start an addition string on compensation (a big idea) with:

We hope the first problem can be solved without too much work, and occurs just before a messier problem.  This close positioning nudges kids to consider the relationship between problems and not treat them as separate and unrelated. Of course a challenge problem in one string might eventually become a helper problem in another string.  What defines helper and challenge is their relationship to each other and to a big idea of the string.

There are a bunch of helper problems that you might use to solve any messy problem.  So this got us thinking about how to encourage students to be really flexible in their thinking and to develop helper problems on their own that worked for the problem at hand.

Our goal, eventually, is to pose messy problems to students without helper problems and have them develop their own.  We thought this might be a nice scaffold along the way. 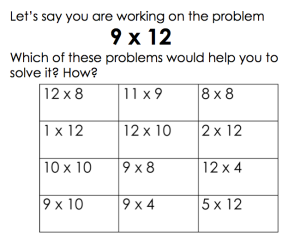 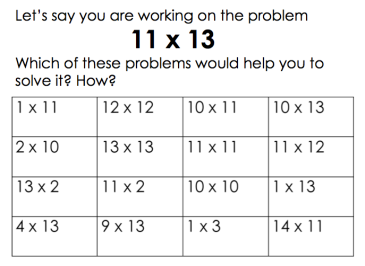 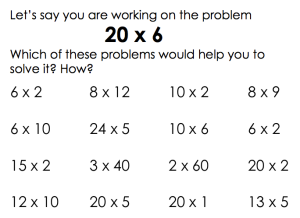 I am a K-12 math educator, primarily working with teachers and instructional teams in and near New York. In addition, I enjoy writing with and for teachers about current issues of mathematics teaching and learning. Currently I work for Math in the City (City College), with ongoing collaborations with Math for America and The Urban Assembly. View all posts by Kara Imm