It’s late in the school year and I’m sitting on the edge of the rug in Angela Fiorito’s 1st grade class at PS 158 in Manhattan. There is no doubt that the kids are excited to begin math, and, in particular, a number string. The class is working on addition, particularly making use of four strategies that were initiated and named after students in the classroom.

These strategies are prominently displayed in a few places and named after the student who first articulated them to the class. They can be found in the back of the room as large student-authored posters, as well as in the meeting area where the class gathers to do strings. 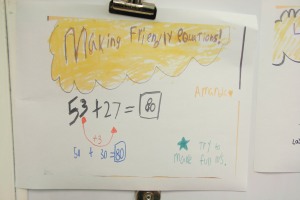 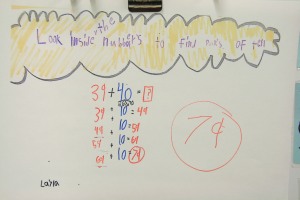 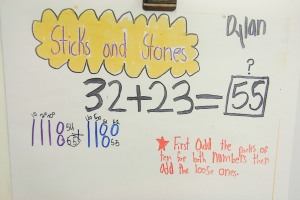 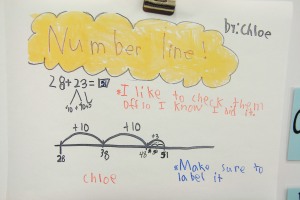 With these strategies in mind, Angela begins by writing and saying the first problem

Thumbs go up quickly and then they start to bounce. Yes, bouncing thumbs — like an icon on the bottom of a dock of applications — are a quiet way to show excitement and readiness in this room. Angela calls on Ava to explain — when you add ten to a number the ones place stays the same.

“Do we agree?” she asks. There is lots of agreement here, signifying that these students have constructed the idea of place value patterns and the role of the ten. But Angela doesn’t stop there, she asks, “Who can say Ava’s idea in their own words?” When she is satisfied with the paraphrase, she continues.

“Let’s do the next one,” she instructs, writing 34 + 12 = in her notebook, which is projected on a large television screen for the kids to see [NOTE: Years ago the school invested in large tvs for each classroom while most of the city purchased SmartBoards. The technology is flexible enough for their instruction and they saved hundreds of dollars in special replacement lightbulbs]. 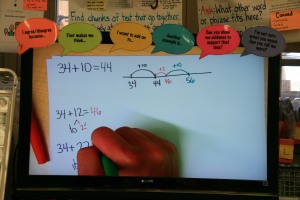 Her next move is a smart one — “Turn and tell your partner not only what the answer is, but how you know and how you can show it.” Now 50% of her students are talking, explaining to their partners how they know the answer is 46 and how someone might represent their particular strategy.

She uses a rain stick to bring the class back.

A student explains that “inside the twelve there is a ten and a two.” This decomposition of number is critical, and their ability to “look inside” a number is evidence of Angela’s work in this area.

“What should I do? How could I show this?” she wonders.

Ryan says, “You can just add another two!”

“So, I can show it right on here,” she notes, as the class watches her make a jump of two on the number line from the previous problem.

A student notes that “would be helpful to add a check next to the 10 and the 2.” I learn that this is part of Chloe’s number line strategy that allows students keep track of their jumps when they decompose numbers into smaller parts. The values and the jumps are even color-coded to ensure they didn’t miss any part of the number. 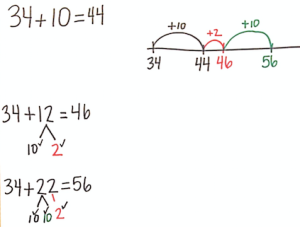 “Let’s do our next one!” suggests Angela, as she writes the following problem:

“Take a second,” she advises in a soft voice. “If you have the hundreds chart, this could be a helpful time to use it.” I watch as students lift out hundreds charts that they have been sitting on until now, pointing and sliding their fingers along the values in the problem.

When there is a critical mass of thumbs — some bouncing and others still — Jean-Luc is asked to share. “Inside the 22 is 2 tens and 1 two,” he notes.

The class then discusses what Jean-Luc’s idea means for the model. Eventually, Angela poses a clarifying question to her students, “So what’s left — that I still need to add to the number line — is this ‘green ten’?” Students nod in agreement.

“So, we’re adding 10 to 46. How do we figure that out?” Several students are eager to share that you can find 46 on the hundreds chart and just “go down a row” or “move your finger down one row” to the 56.

Angela writes the next problem, and true to form, allows students think time. After about 30 seconds, she nudges students to verify their answer and their strategy with their partners. She jumps out of her chair so that she can listen to several conversations. 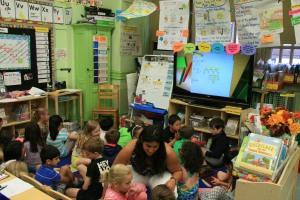 Because she takes the time to listen carefully to her students, she can later say, “Hannah, will you share what you shared with Olivia?”

Angela shows the numerical splitting of the 30 into 3 tens, and then together with the class makes the three jumps of ten, as the class calls out “64,” “74” and “84” in sync with her jumps.

But she doesn’t stop there, “What should I do to make sure I added all of those tens?” She pauses for a moment to really give kids a chance to think. Layla suggests the use of number sentence to be sure that they really added 30, or 3 tens. Angela takes up the suggestion and writes three equations under the number line. 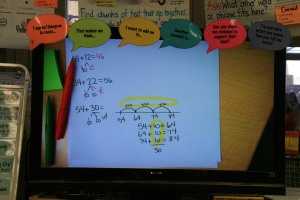 Now, Angela takes a deep audible breath, as if to acknowledge the focus this class community has demonstrated. “Here is our last one” she says. “Don’t forget, we’ve been doing a lot of looking inside the number for tens….”

She anticipates that this problem will take a little more thinking than the others. “Look at the numbers to see what strategy would be most helpful,” she advises as she huddles next to students on the rug.

Eventually, kids are ready to share and excitedly so: “There’s too many loud thumbs. Let’s put our thumbs quietly down. Turn and tell your partner what strategy would be helpful here.”

The room explodes in excited conversation as kids are eager to share their way of solving the problem. Angela listens in and begins to count down, “In five…in four…in three…get ready in two…”

Angela is showing this strategy — compensation — for all the students to see. This way they are hearing and seeing the idea in two ways, not having to follow Amanda and Sam’s words alone.

“Look at what Amanda just did,” exclaims Angela. Sam notes that the problem 53 + 40 is just “better” to solve, so the class is ready to tackle it.

They decide to start at 53, which Angela marks on an open number line, and make jumps of ten.

“Let’s check off this one so I know I did it,” she notes.

“Make another jump of ten and land on 73,” Amanda advises.

“Now what?” Angela asks, with a grin.

“Make another jump of ten and land on 93. You are done!” say a few students.

“We made it a lot easier, didn’t we?” Angela concludes, noting the students’ good thinking and use of different strategies. She sends them back to their tables where they will have the chance to try out some related addition problems with their partner.