After looking over beginning-of-the-year assessments, a new 4th grade teacher was concerned that half of her students were still unsure of the open array model. Some were simply still not convinced of the empty boxes! As her coach, we planned a number string together that would engage the students through questioning, get to know the students even more through open discussions (since it’s still September), and to help each student “hook in” and trust the open array. I modeled this string, hoping to model the questioning but to also model for the teacher who is coming across the open array for the very first time.

Though typically number strings at our school are done either on a sheet of paper underneath the document camera or on a large chart paper, I decided to do each problem on a separate sheet of paper.  This decision is due to the my need to physically manipulate the array.  To prepare, I cut out cm-square paper arrays for some of the first problems. For the 2 x 5, the closed array is there for anyone who is not convinced, which most were fine with this fact. For 4 x 5, I took 2 (2 x 5) closed arrays and put them together, since this was suggested by a student, since I only had a bunch of 2 x 5’s.  I kept asking, “How does this problem remind us of the previous one? Are they similar or different in some way?” and “How can the last problem help us with this new problem?”

When we reached 4 x 10 and 10 x 4, the “magic” started to happen. Since the 4 x 10 array (composed of 2 (4 x 5) arrays) was already taped down on a single sheet of paper, I simply turned the paper in my hands 90 degrees. The students became powerfully convinced that of course the number of squares stayed the same! Nothing happened except I turned the paper! 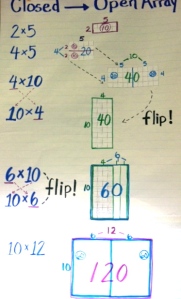 Math and Literacy Coach at PS 158 in New York City. View all posts by Janice