Teacher-author Lindsay Pardeck is in her 7th year of teaching first grade at Eureka Elementary in the Rockwood School District. Eureka is a suburban town located about 30 miles west of St. Louis, MO. She earned her teaching degree from the University of Missouri-Columbia and her Masters in Administration from Lindenwood University. We had the pleasure of learning from her math community this fall and invited her to share her beautiful practice with all of us.

It seemed like just an average Tuesday in math workshop. Most days workshop began with a numeracy routine as it did this Tuesday, and the following 50 minutes involved some investigative learning, encouraged the use of manipulatives and hands on work when needed, offered extra engagement through partnership games, and ended with big ideas coming together as a class.

So it might have seemed like just an average Tuesday when two of my first grade mathematicians, who would normally question their unsure thinking and shy away from sharing, stood proudly in front of a circle of peers and announced, “You must trust the 10.” Their faces beamed as they supported each other in reenacting their “ah-ha” moment of learning just minutes before. It might have just looked like two girls sharing their thinking, but as their teacher, I knew that this was no average Tuesday. Instead, for Penelope and Gracie, this Tuesday meant everything.

Our math workshop started as it normally would with my 6 and 7 year olds seated next to their partner in a circle, eagerly anticipating the next “bus” to pass by in our numeracy routine. We were deep in our work with the Contexts for Learning unit “The Double Decker Bus,” which uses the story of a double decker bus to connect students’ understanding and use of the Rekenrek, or math rack. It gives the simple beads and wooden rack meaning. A partnership of two girls, Penelope and Gracie, held their eyes wide as I prepared the class sized math rack behind me. I moved the math rack with 14 beads pulled to the side (10 on top and 4 on bottom) around the circle for each child to see, and then quickly cleared the math rack and gave time for my mathematicians to think. “What did you see? How many people are on that bus?” I said quietly as their minds filled with ideas. 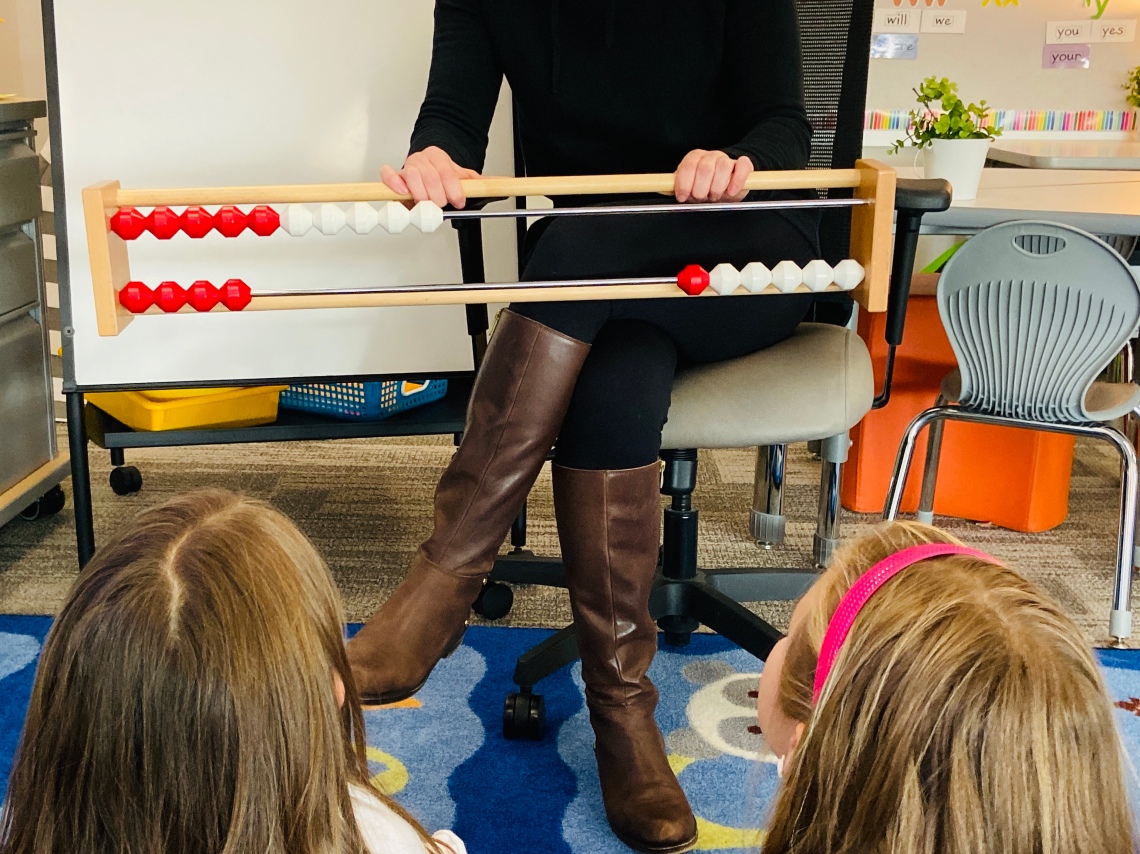 “When you’re ready, ask your partner if they need more think time or if they’re ready to talk,” I reminded my class. The room was alive with chatter as students eagerly explained how many people (or beads) they saw on the bus (math rack), gesturing in agreement (see video below), or defending their alternative thinking with more explanation. As I bounced around the circle, taking note of math thinking, conceptions and misconceptions, I noticed Penelope race to the bin of student math racks. I watched from afar, interested in where this was headed.

As Penelope pulled across 14 beads on her small math rack, reenacting the bus story exactly I had just portrayed, she looked at Gracie and said, “What do you see?” Penelope sat patiently as Gracie miscounted, lost track, and then recounted the beads one by one. Then a little smile appeared on Penelope’s face; this told me she was about to take Gracie’s learning to the next level.

Penelope, who I’ve nicknamed the “queen of questioning,” then asked, “Do you really need to count every bead, every time?” Gracie looked at her for a moment, as her partner pulled back the 4 beads on the bottom to leave only the top row of 10 beads, 5 red and 5 white. Penelope confidently asked her partner, “How many are there now?” Gracie quickly announced, “There’s 10 because 5 and 5 make ten.” Looking at her partner with a wide grin, Gracie replied, “I see what you mean. I don’t need to count the top ten because I know it’s ten if all the beads are pushed over.” At that moment, I made my way closer to Penelope and Gracie’s partnership, ready to help them name this idea to give it more weight in their memory. 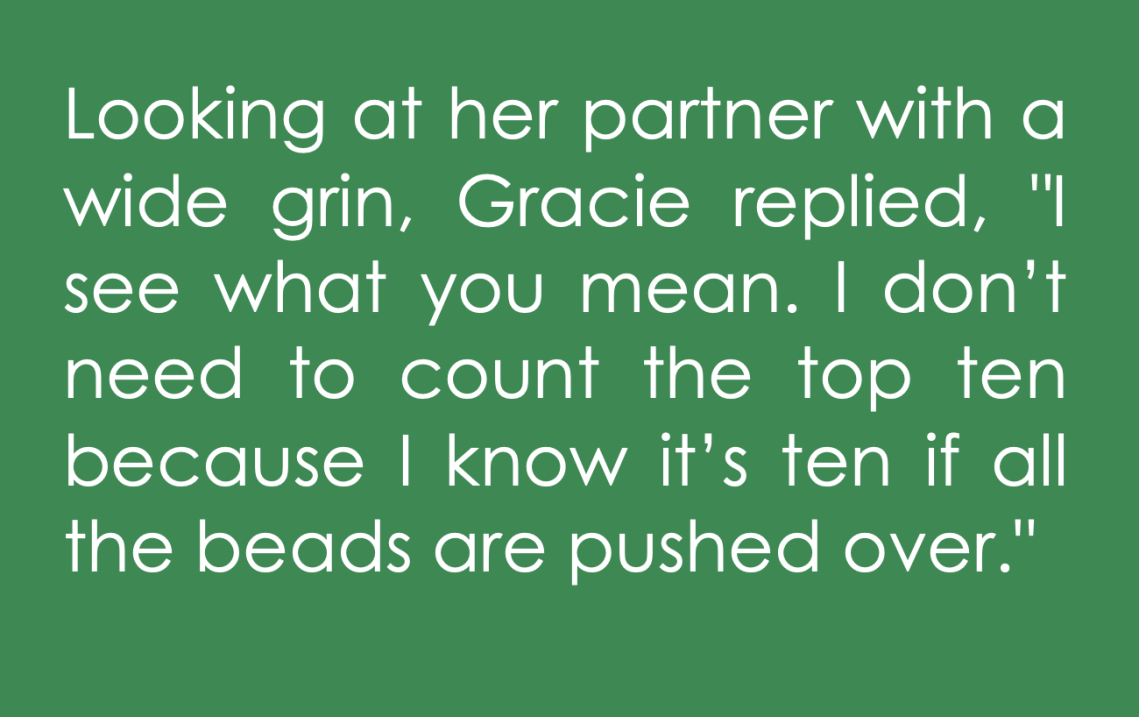 The idea of “trust the ten” went from a simple turn and talk between two partners to whole class mantra, with Penelople and Gracie as the authors of this seemingly magical idea. The girls proudly presented their idea to the class and it stuck. We named it “trust the ten” and this idea was placed on the math wall for all to use; it is referred to by my mathematicians on a daily basis. Through really beautiful questioning and probing (especially for a first grader!), Penelope not only coached Gracie to understand the developmental idea of unitizing, but she solidified her previously shaky understanding and supported the entire class in new learning as well.

This “trust the ten” Tuesday, while not an average day, was also not an isolated event. I have been building a math community where students take charge of their learning and the learning of their peers since the first day of school. Building a classroom of thinkers, questioners, learners, and teachers took purposeful teaching upfront to create more than just a math class, but a math community. It started day one and is incorporated in every math workshop throughout the year. As 6 and 7 year olds, my mathematicians needed to understand a wide array of practices needed for strong math learning. In our first week of school, we focused primarily on conversational skills. This included: how to initiate a conversation, how to share their thinking, how to listen and respond respectfully, how to question, and how to defend or restate ideas. Sentence starters and responding sentences frames were posted on the wall and used all throughout the day. We listed the qualities of a good talker and listener on the wall for reference. As a class we modeled, practiced, critiqued, and observed until solid conversations were held by all. We practiced these conversations in partnerships as well as in our whole class community.

From there, we moved to activities that promoted a growth mindset and the power of “yet.” We watched and discussed the growth mindset and perseverance series from Classdojo.com, as well as participated in couple of the lessons created by Youcubed. Through these lessons, my students engaged in activities that helped develop grit and the ability to work through something that didn’t initially come easy. For example, they were encouraged to manipulate triangles to create shapes that followed a list of constraints. This was tricky work for my brand new first graders, but they learned quickly that new ideas wouldn’t just come easy, that while they might not get it “yet,” with hard work and perseverance, their brains will grow. We learned about brain growth and the importance of struggle. The idea of making a mistake, and then learning from it, became a positive opportunity for my students so encouragement and excitement was given to a mistake made in class. Most importantly, my students were given ownership of their math community. We created a list of norms that exemplified our ideal math class where everyone could learn to his or her highest potential. I created a poster of these norms that hangs in our room as a reminder to all of us of the kind of space we are creating together.

You might doubt that first graders could develop a set of norms, independent of their teacher, and then hold themselves accountable to those norms. But I know this is possible, because Penelope, Gracie and the rest of our math community made it happen and they keep our community developing.  I know it’s going to be an amazing year watching and supporting these young students make tremendous gains together as a community of learners!

I am a K-12 math educator, primarily working with teachers and instructional teams in and near New York. In addition, I enjoy writing with and for teachers about current issues of mathematics teaching and learning. Currently I work for Math in the City (City College), with ongoing collaborations with Math for America and The Urban Assembly. View all posts by Kara Imm